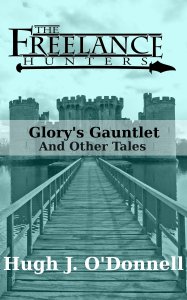 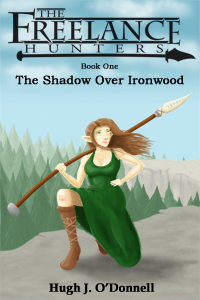 The Freelance Hunters roam the Great Island of Elanterra, righting wrongs and solving mysteries, as long as there’s something in it for them.

Glory Bywater, Mage:  The daughter of a prominent Hillfolk merchant clan, she threw it all away to pursue her dreams of becoming a wizard.  Always chasing the next discovery, she has a lot to prove, both to her estranged family, her snobbish colleagues, and herself.

Bingo Proudfoot, Fingerman:  Bingo wasn’t born in some flash manor lodge.  This Hillfolk was raised by the streets, and he did everything he could to survive.  After rising quickly in the ranks of the underworld, he went straight.  But old habits die hard.

Joachim Verne, The Muscle:  This human hales from the remote and barbarous Icy Mountains, but he’s seen every corner of the Island with one mercenary company or other.  Beyond that, his past is a mystery.  Joachim prefers to let Incisor, his enchanted spear, do the talking for him.

Follow these three rogues in a series of adventures in the style of Fritz Leiber’s “Lankhamar” and Hajime Kanzaka’s “The Slayers.”

Hugh J. O’Donnell (He/His/Him) writes fiction, produces podcasts, and likes things. His work has appeared in The NoSleep Podcast, Quoth the Raven, and Andromeda Spaceways, among others, and he is also the author of the award-winning novella “The City: A Story in 140 Characters.” He is currently producing “Everyday Drabbles,” an ongoing daily flash fiction project on Facebook and Tiktok. His greatest achievement thus far has been winning Carl Kasell’s voice on his voicemail.
View all posts by hughjodonnell →
This entry was posted in Uncategorized. Bookmark the permalink.